THE FLOODS OF APPLEBY - Introduction and 18th Century Floods 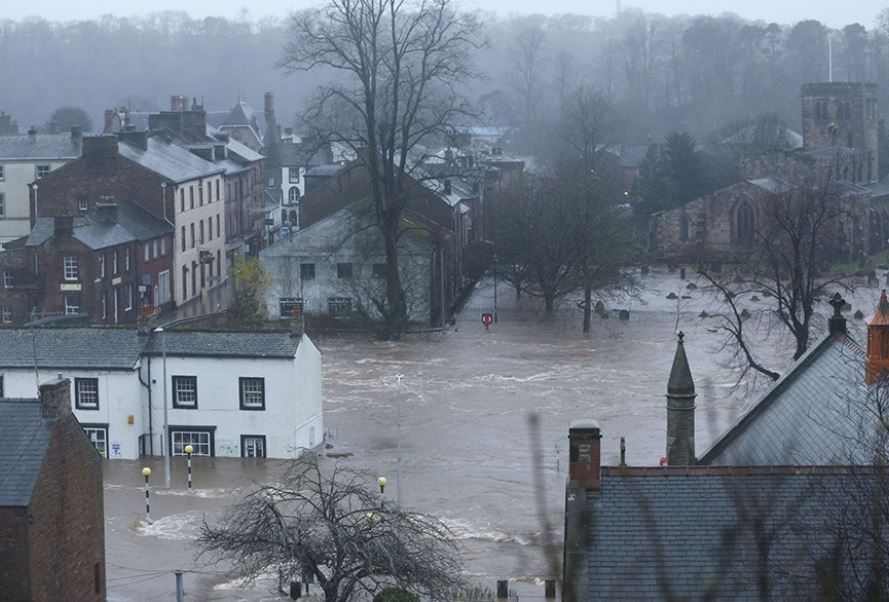 06.07.17. - The creation of separate pages for each century after the page had simply become too big - to read about the floods in the 19th, 20th and 21st century's follow the links below.

16.03.16. - Partial re-write but now including several additional years when floods occurred and additional photographs of 1964, but in particular 1968 - many thanks to Maggie Clowes.

21.02.16. - Commencement of new and dedicated page on 'The Floods of Appleby' - the section had become too large to be just contained within the 'Appleby' section.

The historic town of Appleby lies in a loop of the river Eden in the Eden valley and in the relatively dry east of the county of Cumbria - it is a delightful town, set within beautiful countryside and is well worth a visit and/or used as a base to explore. You can now visit the castle (by guided tour at fixed times/appointment, speak with Tourist Information) and in equal time be within the national parks of the Lake District or Yorkshire Dales or the 'area of outstanding beauty' that is the northern Pennines.

Firstly, an apology, as this will fail to be an exhaustive section on the floods that have affected the town as I am not personally aware of all the historic flood events in Appleby, but following on from the events of December 2015, I thought it appropriate to at least mention those events.  -  The 'Appleby in Westmorland Society' website is also a useful source of information   Appleby Society    and from where I sourced the details of the 1968 event and many thanks goes to Maggie Clowes from the society for her invaluable help and who provided a significant amount of extra information and photographs. From this we have been able to put together the following accounts of the history of flooding in the town. Thanks also to Anne at Scotby for some research and provision of material. However, I'm sure that more will follow with time.

Within Appleby, the church, vicarage, the main centre of town including The Sands and several acres of land all lie on the lowest land and within the loop of the of the River Eden and therefore are most liable to flooding - the picture below showing the extent of the 2005 floods shows the 'loop' of the river Eden and the general upper extent of a bad flood.

Appleby has suffered from recurrent floods throughout the ages, it always has been a problem and will continue to be so. The first account and evidence that I have found for the town is from 1733, whilst according to an article in the Cumbria Magazine (May 1979) by Graham Tobin the first evidence of flooding in Cumbria is from 1571. Tobin also comments that in Cumbria "between 1800 and 1976 over 75 floods were recorded in 51 different years. During each of these years at least one settlement was inundated on more than one occasion, although it was the specific years of 1822, 1856, 1925 and 1968 when the most extensive and serious events took place."

Apart from various flood defences having been built and the Environment Agency having run a pilot scheme in the town for flood alleviation, the 'Desmond' event perfectly demonstrates the susceptibility of the town to flooding in times of heavy and prolonged rainfall and indeed from thunderstorms.

This susceptibility to flooding is despite the fact that Appleby is a relatively dry town with an average annual rainfall of 892.9 mm (35.1 in.). However, the River Eden rises in the Mallerstang valley on the Cumbria/Yorkshire border, flows through Kirkby Stephen and receives the water of many becks flowing off the Pennines to the east before it reaches Appleby. A relatively shallow river yet with the fact that the town lies relatively close to the source of the Eden and with that 'loop' in Appleby, the Eden can rise and fall with equal speed. It regularly demonstrates this and occasionally with devastating consequences, although I have not yet heard or discovered of any deaths(<>) being directly attributed to any floods in the town and the deepest that the flood water has been reported to have attained is 6ft (1.83 meters).

From an Environment Agency 'Eden Catchment Flood Management Plan', summary report of December 2009, Appleby is described as having '...approximately 220 properties at the 1% APE [annual risk] risk of flooding ... we maintain raised defences and a pumping station in Appleby. Parts of Appleby town centre are not protected by the existing defence and are at risk of frequent flooding. Surface water also contributes to flood risk in the town.'

There is also a 'Flood Siren', sounded when floods are expected which acts as an early warning for residents to prepare their properties and which was preceded by a more traditional method of ringing the church bells.

One example of the numerous floods in the town down the ages is a contemporary account (=) that recorded the opening of the vault at St. Lawrence church in 1884 in which the body of Appleby's most famous resident, Lady Anne Clifford, lies. This vault is under the north-east chapel of the church and the account records what was found ' ... below which is a brass plate engraved in the highest class of workmanship though like the handles a little corroded through the effects of the numerous invasions of the river Eden when in flood'.

<> Deaths - included in the following are several tragic deaths, one by lightning (1912), one by drowning, (Harry Whitehead in 1924) and a second one from drowning but only after being 'stupefied by lightning' (1856).

From my research, below are the years during which flooding is known to have occurred:

The majority of the floods that are listed below occurred during the months of November-February, basically over the winter, with few outside of these months, 1819, 1855, 1898, 1912 and 1928 being the only floods in summer.

Below are some accounts of the various floods that I have found to date, those without an annotation are from my own research, the other sources of information are:

** are from an Environment Agency briefing note dated June 2010, although they don't quote their source

$$ are from 'The Story of Appleby in Westmorland', by Martin Holdgate (first published 1956, but with several revisions, notably 2006)

= taken from 'The History of Appleby' (second Ed' 1950) Matthews, Canon W A, and Whitehead, J F. (repeated in 'The Story of Appleby of Westmorland' as above).

But it is the newspapers that are the most invaluable source as most of the events were reported locally and some even further afield. The Westmorland Gazette, Cumberland and Westmorland Herald and assorted others give such rich accounts and the style is fascinating to read. Those accounts that come from newspapers are accredited accordingly and I have made the conscious decision that, when and where able, to re-produce the actual newspaper cutting for you to read.

^^ Further accounts have been provided by the Heelis family to the Appleby Society, taken from the family's scrapbooks. 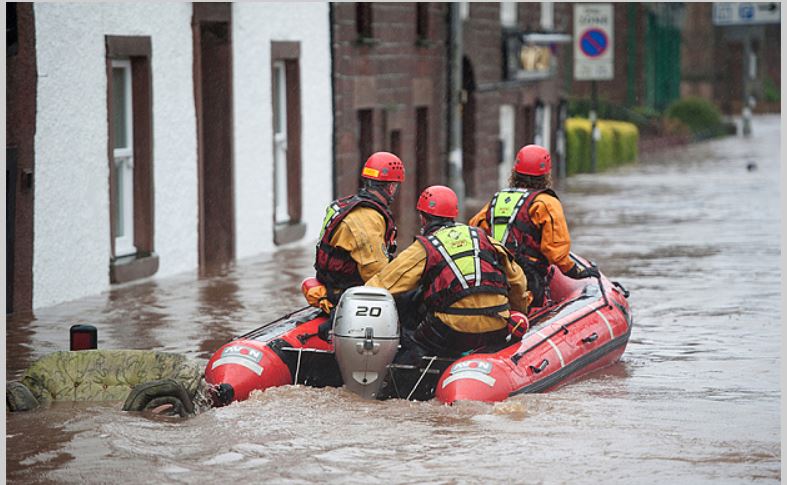 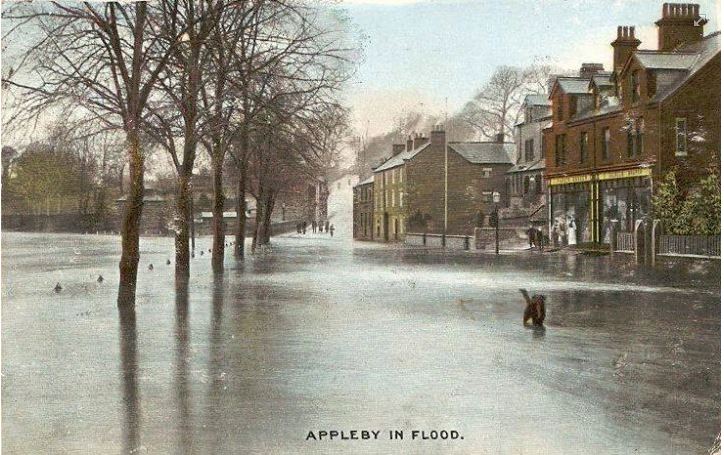 Remarkably there are some excellent accounts of flooding in the town back to the late 1700's which apart from the account for 1771 are mainly provided by the newspapers of the day and from far and wide.

At some recent point there had been a 'Great flood' that affected vast swathes of Cumbria and whilst I have yet to find anything directly relating to Appleby, it was such a widespread event that Appleby would also have seen some flooding.

One of the local accounts that I have is from the 'Appleby: Michaelmas, Petition Roll' (::) dated 1733 (but could posssibly be 1726), concerning the road to Maulds Meaburn. 'The highways surveyors, William Burra and William Shipherd for Maules Meaburn, desiring county to repair road leading to bridge in Maules Meaburn recently rendered impassable by "the late extraordinary floods" along river Lyvennet.'

Indeed in a report on the counties bridges by the surveyor Thomas Pattinson, dated 5th April 1733, he describes: "Cockermouth Bridge Over [the] Darwent" is much damaged by recent floods; Caldew Wood Bridge is dangerous and "greatly complained of"; Cock Bridge needs repair to its north side; Workington Bridge is "much to be fear'd", as is Warwick Bridge; "Longwathby Bridge ought to be immediately Built; Eden Bridge and Priestbeck Bridge, though lately repaired, need repointing to avert decay, and their paving is "frequently Complain'd on".

This was a significant event, comparable to the worst floods in the town and very destructive. Elsewhere in the north of England many bridges were destroyed, most notably the Tyne Bridge and even following the floods of 1815, it was still much referred to and became the subject of a book - see below. This event is also best known for the infamous 'Solway Bog Burst' when there was 'the heaviest deluge in 200 years and flood water stood 15ft deep', which occurred at the same time.

In Holdgate's book, which in reality he will have taken from the book of 1818, 'An Account of the Great Floods in the Rivers Tyne, Wear and Eden 1771 and 1815' he made the following reference, (the article from the actual book is re-produced in full below): 'The bridge gate had been damaged in 1771 by a great flood which poured along Bridge Street and through the churchyard, tore up flags in the cloisters and the pavement in the streets, caused two arches in St. Lawrence's church to subside, and made the furniture float about and collide in the houses so that 'many lost great store of liquor'.

There is also a reference to these floods in the 'Appleby: Christmas: sessions roll: House of Correction (Appleby)' (county archives at Kendal Ref: WQ/SR/369/14) the following is included:

'Robert Fallowfield's bill of expenses for repairing the damage done to the stable belonging to the House of Correction by the great flood on the 16th day of November last past.'   date November 1772.

Note that he states November 1771, however, it will undoubtedly be December 1771 and the actual invoice is shown below. 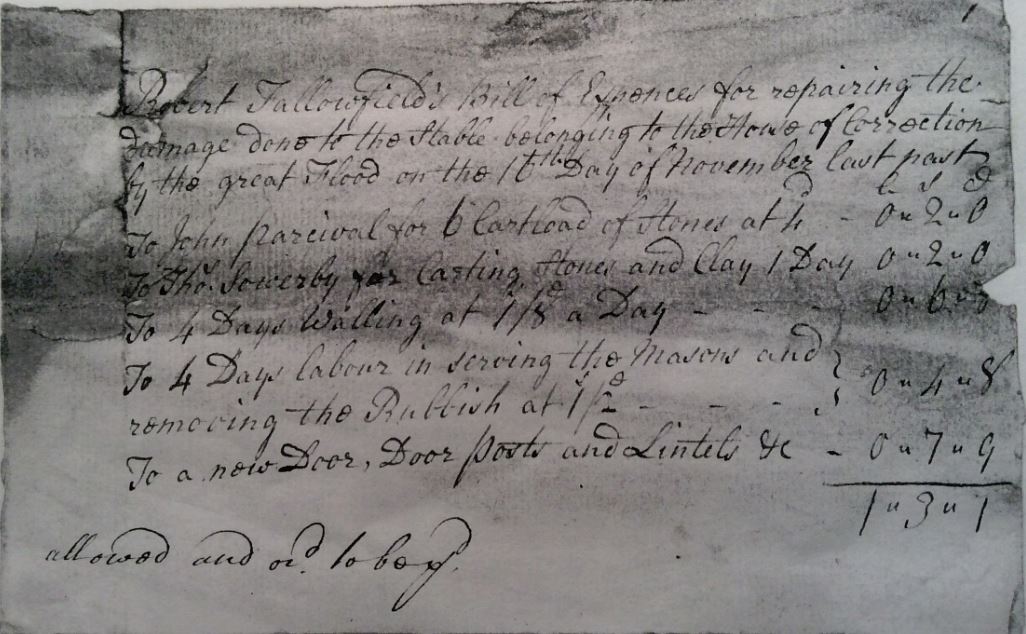 And then onto the book itself: 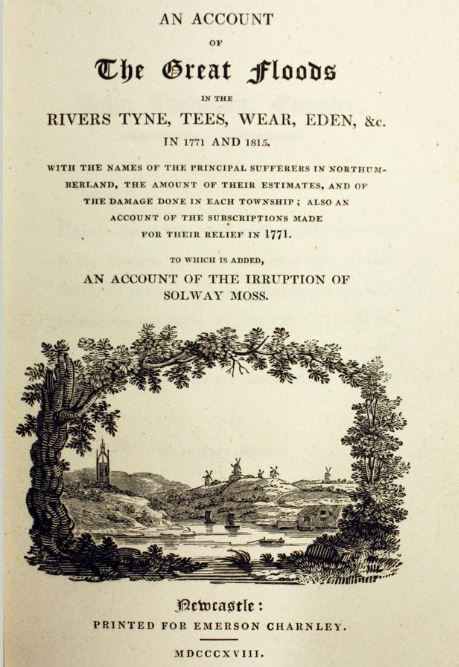 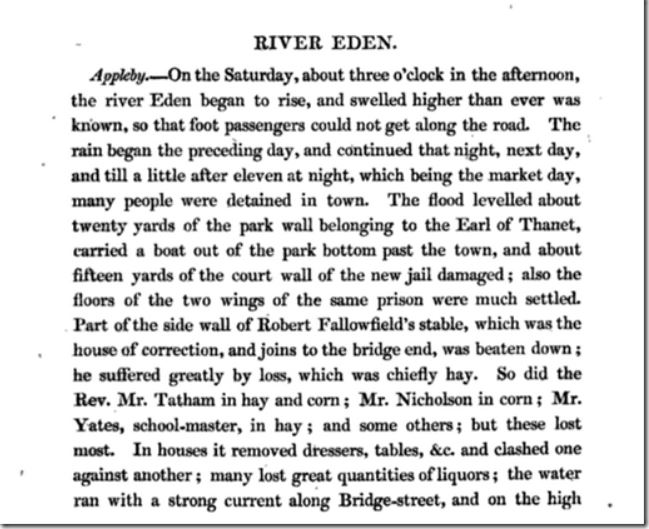 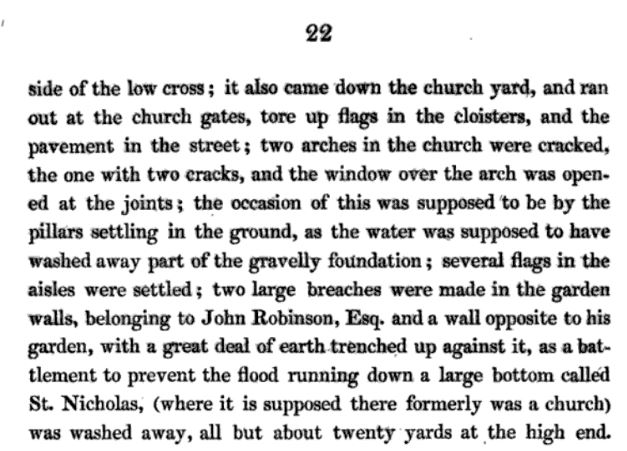 The following account is taken from the Northampton Mercury dated 4th December, seems like Shap was a place to avoid that night: 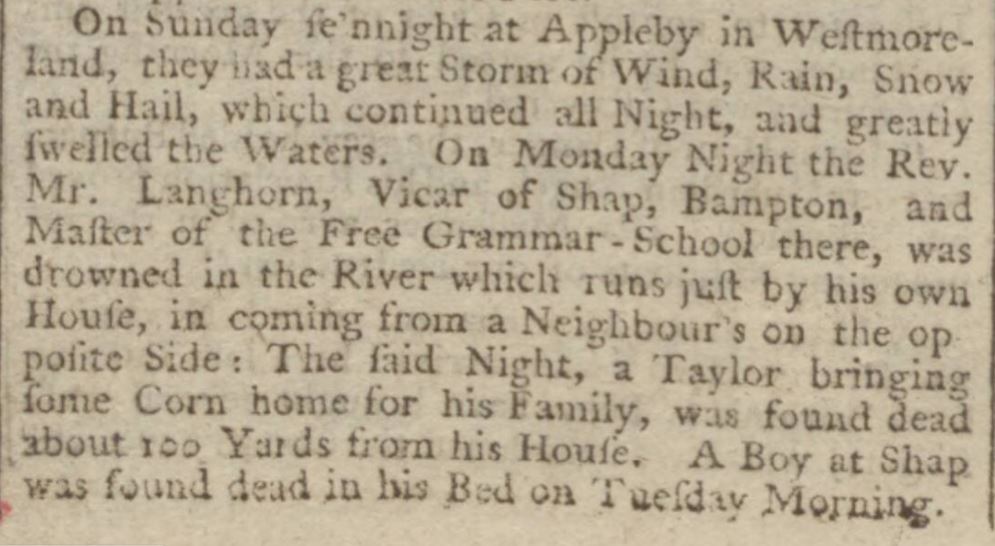 The beginning of the 1790's saw flooding in alternate years.

The following account is taken from the Cumberland Pacquet and Wares Whitehaven Advertiser dated 22nd December: 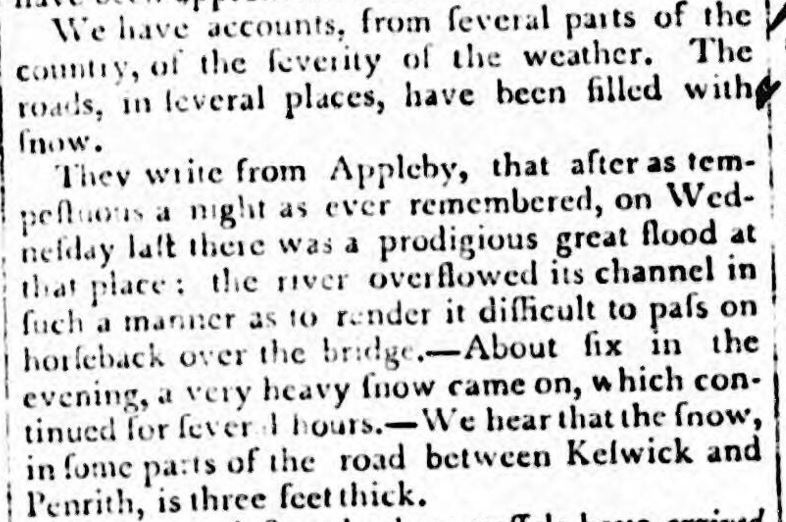 1792 - September    'Bridge Damaged with Horses and Cattle Swept Away'

The following account sounds quite serious and is taken from the Stamford Mercury dated 7th September:

The following account is slightly difficult to read, it is an old paper after all. These floods were the result of both rainfall and the effects of snow-melt - taken from the Newcastle Courant dated 8th February: 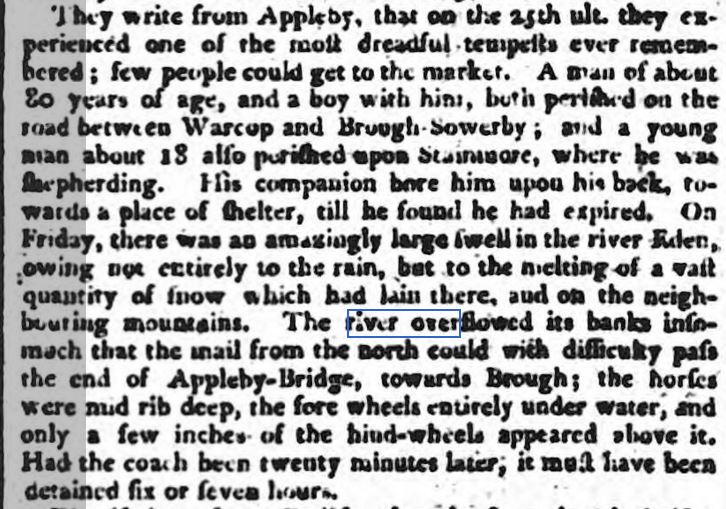